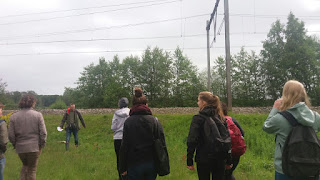 On a typically chilly spring morning in the northern province of Groningen, an enthusiastic group of students departed from the University of Groningen. They gathered in front of the statue of the famous Aletta Jacobs. Although they knew it, they paid little attention to the fact that their meeting point was also a heritage site, one among others in the Netherlands, which celebrates and remembers Jacobs’ irreplaceable contribution to suffrage and the furthering of women’s rights in the Netherlands. She was the first woman to study openly at a university in the Netherlands. The statue is easily accessible to all passersby and has a plaque below it giving more information about the monument, reinforcing its importance to Dutch cultural heritage. The irony here was that the groups’ destinations were in comparison quite the opposite. For some, it was a refreshing experience to change scenery and take the classroom outdoors. What made the trip even more special was that the group travelled by bicycle.

Their first leg of the journey took approximately forty minutes. When they arrived at De Punt, the guide for the day, modern archaeologist Jobbe Wijnen, was already waiting for them at the site, which in contrast to the statue of Aletta Jacobs is not yet acknowledged and remembered as cultural heritage. Rather it has been allowed to be concealed by vegetation as if to let the memory of the site slowly fade away. To the average onlooker, it would seem to be just another part of the countryside of the Drent’s province.

They stopped midway at a clearing with trees forming a canopy over their heads. Jobbe Wijnen started explaining what the history behind the events was and some of what had taken place, while the group moved closer to each other to not miss one of his words.

On the 23rd of May 1977, the Netherlands was shaken by tragedy with effects which are still felt today, especially by the Dutch and the Moluccan community in Bovensmilde. Nine armed Moluccans pulled the emergency brake to stop a train, taking 50 passengers hostage for the next 20 days, after which the hijacks were apprehended. The incident did not pass without fatalities, with six hijackers and 2 civilians being killed. But what was the origin of these events? During the colonial time in The East Indies, the Dutch kingdom recruited soldiers on the Maluku islands to keep the Indonesian population obeying the colonial oppressors. During the Second World War, the Dutch lost control of the region now known as Indonesia. After the war, they still had interests in recapturing the region. To achieve this the Moluccans soldiers fought side by side with the Dutch army. However, the war did not last long before the Dutch were defeated and forced to retreat back to the Netherlands. For the safety of the Moluccan soldiers, they were forced into exile to the Netherlands, where the Dutch government promised them to help take back the Maluku islands and to make them an independent nation. This, however, never actually happened. The Moluccans were treated with disdain, placed in concentration camps formerly occupied by Jews during the Holocaust and stripped of their army ranks. After 25 years of housing, the Moluccan people found the Dutch government had failed to fulfil their promises. Leading to an outburst of anger towards the Dutch as they did not hold to their promise.

The group was hanging on every word that was spoken, as the story was quite different from what most of them had heard before. They proceeded to move closer to the train tracks, to the exact point where Jobbe Wijnen further detailed the occurrences during the period of the highjacking of the train and on the need to preserve this site as cultural heritage. For experts like Wijnen, the issue to acknowledge this site as cultural heritage is of great concern, but it is difficult to receive funding for sites such as these due to many adverse factors including its ‘dark cultural heritage’. These arguments need to be counteracted so that the value of sites such as these will also be acknowledged and to show that its positive impact on society outweighs the negative.

The group discovered that the history of the relationship between the Dutch and the Moluccans has slowly faded into a vague memory to many in the Netherlands. However, in a small town, Bovensmilde, where one of the major events surrounding the complexity of this relationship occurred simultaneously with the hijacking, the memories are still very much alive. After viewing the site where the train was hijacked the group migrated to this next destination. But before they would arrive the group would have separated, some of them were not able to finish the almost two-hour bike ride. The survivors arrived hungry and thirsty. Luckily most of them had packed the common Dutch lunch, a sandwich. After this replenishment, the group turned to Jobbe Wijnen once more, as they had arrived at what seems to be a playground.

Four other Moluccans invaded a primary school in the village of Bovensmilde, taking the 105 children and five teachers who were in the school hostage. The children were released after a few days, but the teachers were kept hostage for the same 20 days as the train passengers. Where they stood now was where the school used to be. With these combined actions the hijackers wanted to force the Dutch government to keep their promises, break diplomatic ties with the Indonesian government and release 21 Moluccan prisoners involved in a train hijack of 1975.

Before Jobbe Wijnen could continue the group got distracted by a man in his fifties, who had joined the group to listen to the story of Jobbe. This man seemed to be a casual bystander, but nothing is further from the truth. The man was Geert Kruit, one of the children who was kept a hostage in the school. The group and Jobbe Wijnen was surprised with this sudden turn of event. The group could now hear the story from a person who experienced the event and is currently still living in the same village. The group is shocked by this open-hearted experience and is leaving the place wholesome.

In this particular case, it is important to note the invisibility of the site. At ‘de Punt’, there is no indication whatsoever that this place was once the site of a tragedy. What is left is the two bullet holes (see picture) in the electricity pole. And at the school, a small concrete statue is the only visible symbol of what has happened.

The question is, should these heritage scapes be more cultural or physical visible to outsiders or not?

With the “plof” into the Grunneger laboratory

maart 19, 2018
On Saturday the 17th of March, the ‘Huis van de Groninger Cultuur’ the ‘RHC Groninger Archieven’ and the ‘Bureau Groninger Taal en Cultuur’ (RUG) (amongst others), organised ‘de Dag van de Grunneger Toal’ (the day of the Groninger language). The special celebration of this minority language was hosted inside the building(s) of the Groninger archives. When entering the building you were met with an introduction committee with stickers, leaflets and bags of the day on the right, and a stage on the left. During the day a variety of Groninger artists would make their way to that stage to perform their Groninger music, varying from lighthearted melodic songs to more energetic and powerful ones. In addition to that, there were presentations and workshops on a wide range of topics such as the Groninger language, literature and the future of Gronings, given by Goffe Jensma, Jan Glas, Louis Stiller and more. It was also possible to stroll around the fair of books, CDs and films. As second (an…
Een reactie posten
Meer lezen

The Past in the Present : Remnants of Slavery in Groningen.

In our previous blog, we visited sites related to the invisible heritage related to Moluccans in the Netherlands. We are again going to take a look at invisible cultural heritage. This time, as you might have guessed from the title, in Groningen, the capital of a province of the Netherlands of the same name. We toured the city to explore the history it has with Slavery another form of Dark Cultural Heritage that has been omitted and ignored resulting in its invisibility. This history, which is not only a part of the history of Groningen but of the Netherlands has been slowly forgotten, hidden in plain sight. However, a Modern historian and co-author (with Margaret Fokken) of the book “Sporen van het Slavernijverleden in Groningen” (Traces of the History of Slavery in Groningen), Barbara Henkes has joined forces with the project, Mapping Slavery NL to acknowledge this heritage in the province of Groningen and is currently continuing this…
Een reactie posten
Meer lezen